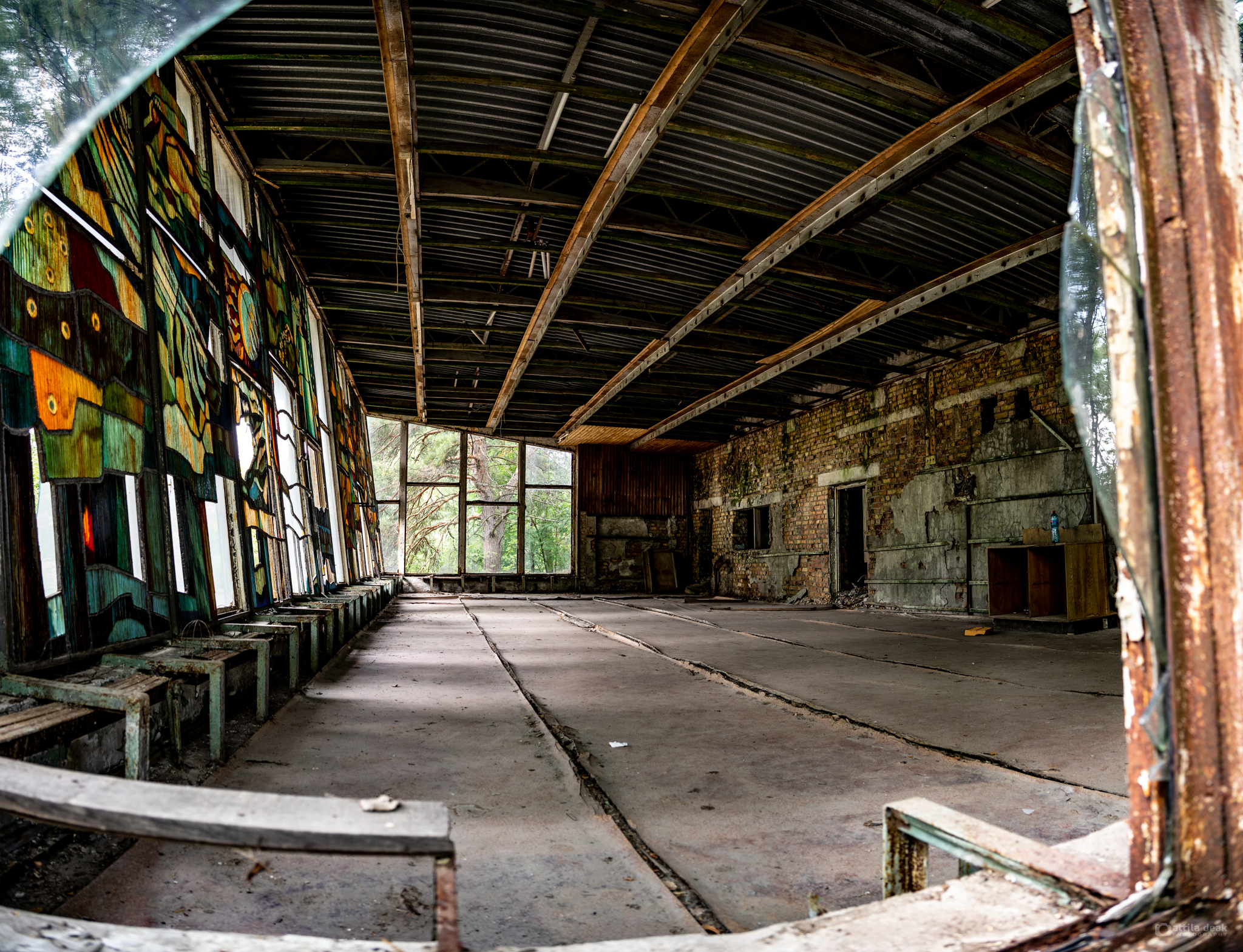 Café Pripyat is one of the most recognizable, and beautiful buildings of Pripyat city, with colorful stained glass windows, and huge glass walls leaning outwards. The globe-formed statue next to the entrance can be also familiar. The architecture is one of the best of its age with the large panorama windows and leaning walls. The Café had a perfect 360-degree view of the lake, and the port, but no because of nature, the view is blocked. The radiation levels are still high at some points of the staircase leading to the port, and also the water is still contained, so fishing is strictly forbidden for the locals. We found a few automated water dispensers – similar to the Cola machines used in the western world.

Café Pripyat is one of the most recognizable, and beautiful buildings of Pripyat city, with colorful stained glass windows, and huge glass walls leaning outwards. The globe-formed statue next to the entrance can be also familiar. The architecture is one of the best of its age with the large panorama windows and leaning walls. The Café had a perfect 360-degree view of the lake, and the port, but no because of nature, the view is blocked. The radiation levels are still high at some points of the staircase leading to the port, and also the water is still contained, so fishing is strictly forbidden for the locals. We found a few automated water dispensers – similar to the Cola machines used in the western world. 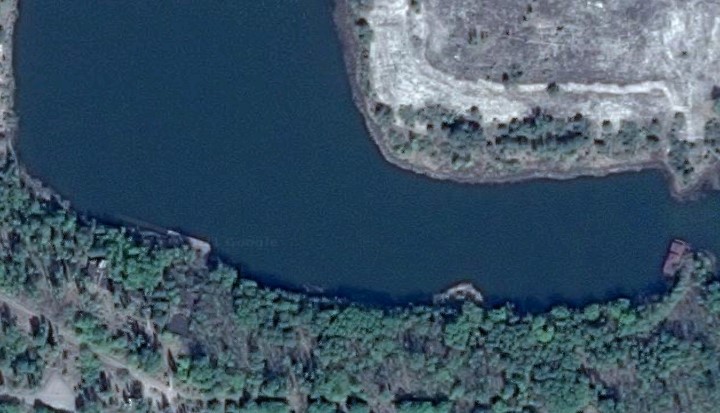 The background story of the Café Pripyat and the Port of Pripyat:

The Café Pripyat is located on the waterfront on the outskirts of Pripyat city. It is famous for the stunning, stained glass windows and remains one of the most picturesque and recognizable buildings in Pripyat even today. It was a popular place to spend time relaxing for the young residents of the city, built to be home to the workers at the nearby Nuclear Power Plant.

The inside of the cafe had ornate stained glass windows. Totally different from the uniform architecture seen in much of the city. Compared to the uniform blocks that form the basis of much of the city the architecture of the cafe, a building designed purely for pleasure, is a radical joy and provides an insight into the forward-thinking attitude and optimism of the city at the time. A place for enjoyment and pleasure in this young forward-thinking city.

On the shores of a lake the beautiful cafe, Cafe Pripyat or “The Dish“ as it was known locally was a popular place for the young residents of Pripyat city to meet.  A place where young city dwellers (the average age in Pripyat was 26) would gather to chat and drink on the round sun-drenched terrace that overlooked the water. From the stone-clad terrace, a wide stairway leads down to the boat dock and onto the water’s edge.

Those wanting a 360-degree view could climb up to an observation platform located on the roof of the café. At ground level, the striking stained glass of the windows remains largely intact and with the low afternoon sun breaking through the trees. The figures formed from slithers of colored glass stacked side by side. Outside solid V-shaped columns follow the route of the covered walkway.

The stone-clad terrace had a wide stairway that leads down to the jetty where the pleasure boats would dock, picking up passengers for pleasure cruises along the water. At the top of the steps, v-shaped columns supported a covered walkway. Busy in summer with picnics and BBQs, and using sailboats, in the winter months, families would ice skate on the frozen water, and men would cut holes to fish.

One of the most famous places in the city of Pripyat, both before the accident and after it. It was here in 1977 that builders celebrated the launch of the first power unit of the Chernobyl nuclear power plant. By Soviet standards, the Pripyat Cafe was fairly quiet, not a big establishment, but for that period it was a very nice and attractive place. Inside there is a magnificent mosaic preserved, it is a stained glass window on which are depicted: girls, flowers, the sun, planets – perhaps these are symbols of Soviet well-being. In the courtyard of the cafe, there are still the bowed corps of Soviet soda machines selling soda. Then you could buy two kinds of soda: simple and slightly salty water, worth one kopek per glass or with syrup – for three kopecks. Also in the cafe, there was a tent with kvass, where you could quench your summer thirst. Previously, life was in full swing here, celebrating holidays, staging parties.

The cafe is connected to the canopy of the river station building, which has a semicircular shape. Therefore, here the passengers spent time waiting for high-speed passenger boats on hydrofoils “Rocket” or “Meteora“. Going down the steps to the pier, to which the ship once moored, on the horizon we will see PZRO “Sandy Plateau” – the point of disposal of radioactive waste. It was on this site that another microdistrict of the city of Pripyat should have been built, namely, the sixth microdistrict of Pripyat. And to the right, the landing stage, a floating pier, part of the cafe “Pripyat”, which served for loading or unloading passengers, glanced at it. After the catastrophe, contaminated soil was taken out for burial.

Fans of the game S.T.A.L.K.E.R. having visited Pripyat, will surely recognize this place as one of the key locations of the cult game.

In the port of Pripyat, the half-sunken ship is still visible, which was a blue ship 30 years ago.

“Secretary of Pripyat Komsomol Town Committee Aneliia Romanivna Perkovska recalls: “By 16:00 on Saturday, April 26th, members of the Government Commission in Pripyat began proposing the idea of loading sand onto helicopters and scattering it over the crippled reactor. The debates about this activity lasted for a few hours as members discussed if sand alone would be adequate or if lead should be added as well. It was a well-known fact that the sand on the banks of the river was of a very fine quality and unadulterated. Finally it was determined that sand from the banks of the river near Café Pripyat would be loaded into sacks to be dropped on the reactor. 150 shovels and young men were dispatched, along with a truck loaded with empty sacks. Soon enough bags were filled that they ran out of rope to tie the sacks with, so they found some red material that had been saved for use at festivals and began tearing it into straps to use to close the sacks. The men worked throughout the evening and the night, loading one sack full of sand after another, until they were exhausted and were allowed to go home and get some sleep. The next time you visit the café and gaze upon the beautiful stained glass art, remember not only how it would have been for the people that came to enjoy coffee and read or to watch children swimming and playing with sailboats in the harbor – but also remember those who spent long hours on a warm spring night toiling with shovels to load sand into bags to dump on the reactor.’’

The debarkader D-241, a floating pier that used to be stationed at the Marina River Station in Pripyat. The station was built in 1973 to transport people via the Pripyat River, which flows into the Dnieper River. After the Chernobyl Disaster, it floated away from the station and stranded here on this landing stage close to the Pripyat Sanatorium. The Marina River Station is situated 100 meters to the west.

In the late 1970s, water transport was very popular in the USSR. The transportation of goods and passengers over water became more affordable. So from Kiev you could sail to Pripyat, the city of Chernobyl, and to neighboring Belarus. The River Station was located on the Yanovsky Zaton next to Pripyat Cafe. Yanovsky Zaton is an artificial lake specially created for the needs of Pripyat. Here departed boats named ‘Rocket’, ‘Comet’ and ‘Meteor’. The streamlined Soviet passenger boats used hydrofoil technology that lifted the boat’s hull out of the water, decreasing drag and allowing it to travel at incredible speeds of up to 150 km/hr.

The debarkader had several decks and was used for entering the passenger ships. In the Soviet Union, these floating piers, or jetties were produced in large numbers. The structure of the jetties was made of wood and concrete. It maintains a fixed height to the ship independent of river or lake elevation. It used to be joined to the shore with a gangway.

Today the debarkader is not used, it slowly rusts and is sinking.

Archive photos of the Café Pripyat: 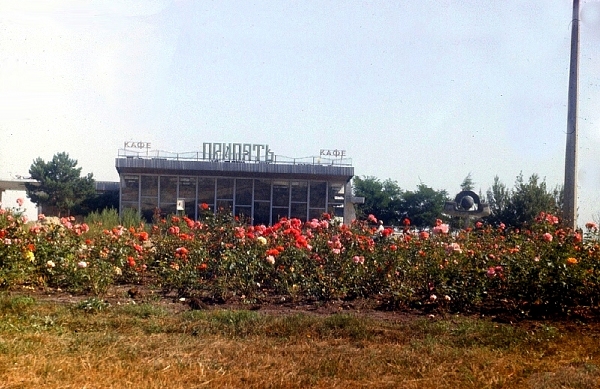 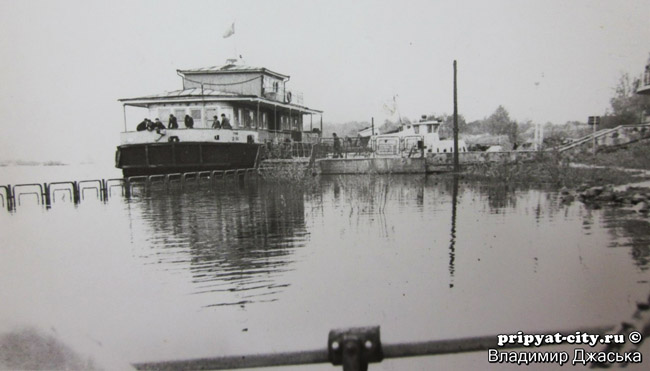 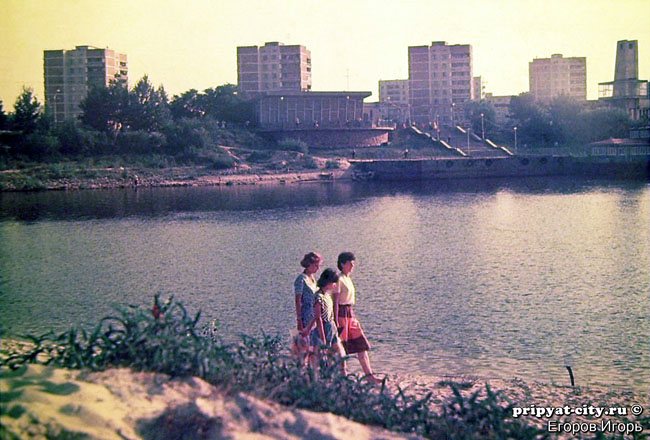 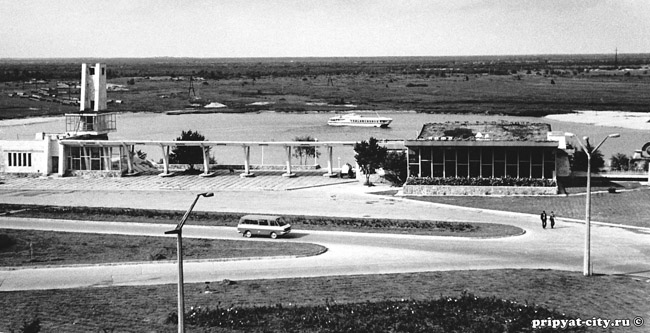 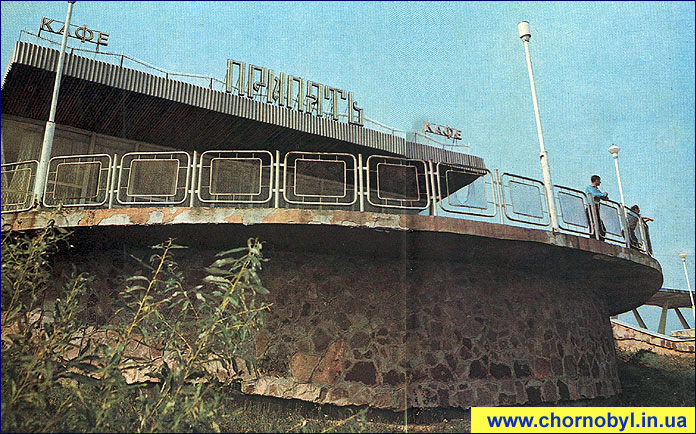 Articles and other photos about Café Pripyat:

Videos of Café Pripyat and the Port: