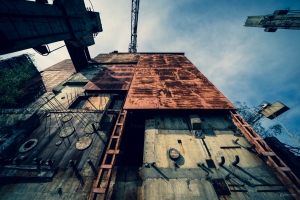 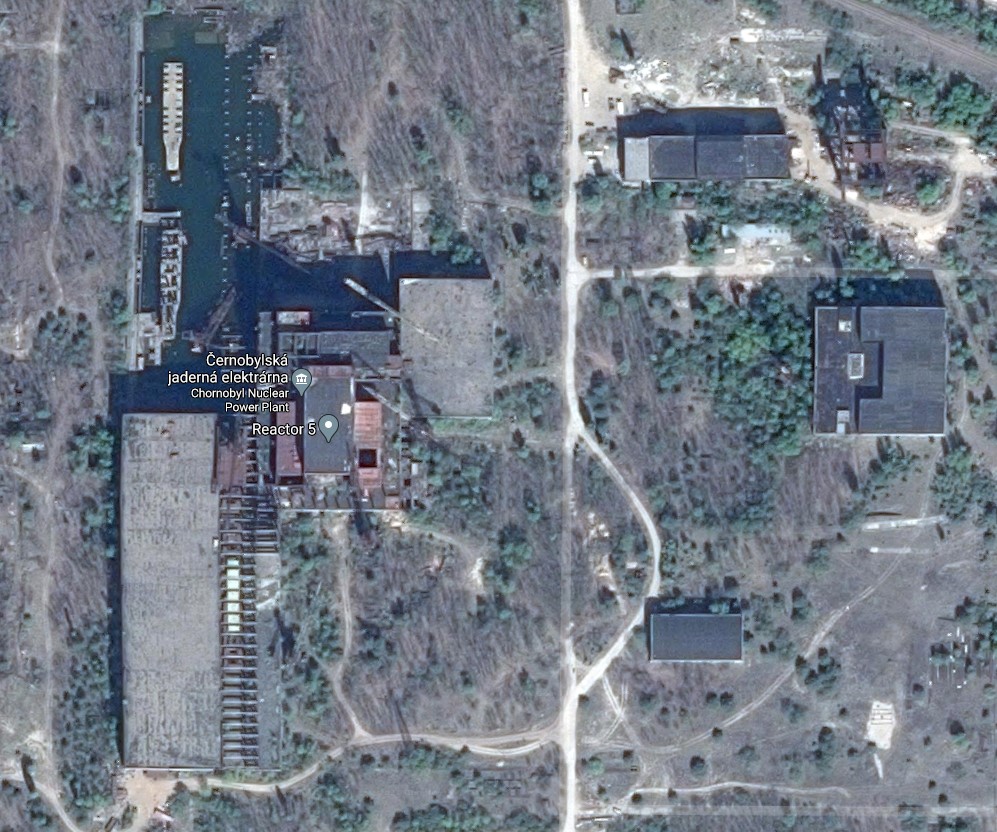 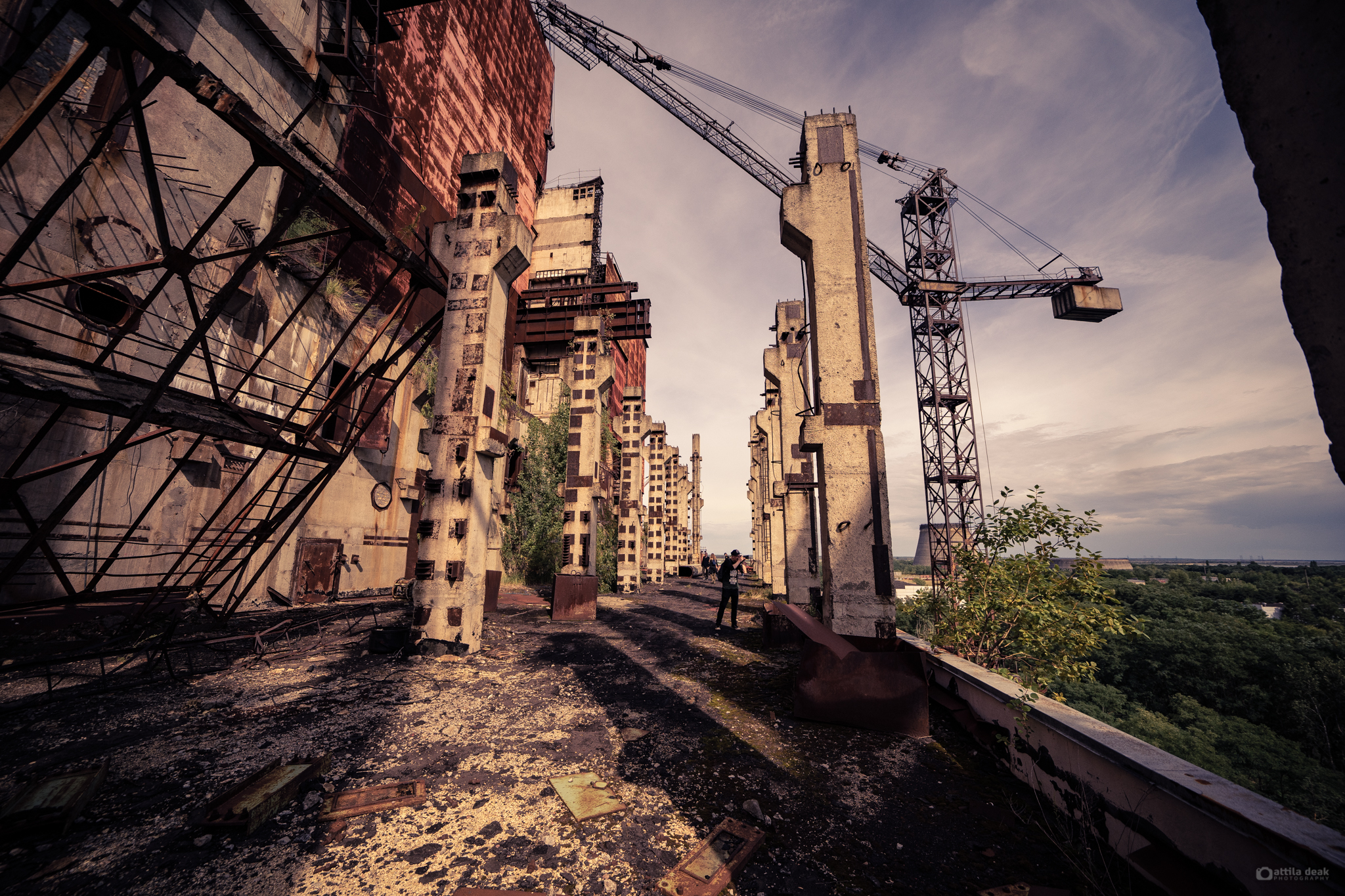 Construction of reactors number 5 and 6 continued throughout the night of the explosion at the 4th Chernobyl nuclear power plant. If the glow of the fire wasn’t visible from the upper levels then as dawn broke the smoke must have been. Two more reactor blocks were under construction at a nearby site, with reactor 5 finished in about 70% when the explosion occurred. All of the construction work was halted on the 27th of April. Reactor 5 was scheduled to come online around November 1986, less than 6 months after the catastrophe.

Despite the disaster unfolding next door at 8am that morning, the 286 construction workers of the day shift clocked on. Construction work on 5 and 6 was soon stopped but resumed again on the 10th October 1986. Six months later on 24 April 1987 work was once again halted and on May 23, 1989, the decision was made not to complete the reactors.

Reactor Number 5 was approximately 70% complete at the time of the accident. The 6th was scheduled for completion in 1994. When functioning Reactors 5 and 6 would have been capable of producing 1,000 MW’s each.

The RBMK-1000 reactors were 11.8m tall and 7m in diameter, therefore installing them inside the building required specialist equipment.

There were two portal cranes capable of handling this task in the country. One still stands next to a workshop where the reactor pressure vessel for the 5th block of the CHNPP had been under construction in April 1986.

It’s hard to appreciate the scale of Chernobyl’s unfinished giants. With the larger of the two cooling towers visible from kilometers around it’s only when you start walking towards them that you realise just how far away they actually are and you can fully comprehend their size. You can see the unfinished cooling towers of the third stage of the Chernobyl nuclear power plant, moving along the road from the village of Kopachi, in the direction of the nuclear power plant. Cooling towers of the 3rd stage of the construction of the Chernobyl nuclear power plant are located on an artificial island, between the Chernobyl cooling pond and the branch channel. Cooling tower – a special system for cooling large quantities of water, directed by the flow of air. They were built to cool the 5th and 6th reactors of the Chernobyl nuclear power plant, since the capacity of the artificial pond, as a cooler, would not be enough to cool the water of two more power units. Sometimes cooling towers are called cooling towers. Cooling occurs due to the partial evaporation of water: inside the tower, hot water enters the top, to the water distribution device, which is located in the center of the tower, then is sprayed down, thus cooling. In other words, water comes into contact with air, which gives up part of its heat and thereby lowers its temperature. The height of the tower is 110 and 30 meters, diameter – 60 meters. The location of the towers has a relatively high level of pollution since the distance to the Chernobyl nuclear power plant is only three kilometers.
Approaching the towers involves crossing a large expanse of concrete, hundreds of triangular metal beams are stacked up on the right-hand side. As we draw closer we can count several small triangular radiation signs protruding from the pile. Leaving the roadway, it’s necessary to tread carefully as the terrain is pitted and uneven. The whole area is strewn with hidden obstacles, chunks of rusting metal of varying shapes and sizes litter the ground and strands of cable snake through the long grass.
The Mural that deserves attention, on the thirty-year anniversary of the Chernobyl accident, the Australian artist Guido van Helten, painted on the wall inside the Chernobyl 110-meter cooling tower. The master depicted on the wall a photograph taken in 1986 by photojournalist Igor Kostin – who was one of the first to be at the center of the Chernobyl disaster and took the first photographs of the destroyed reactor in Chernobyl, coming close to him. Now cooling towers are even more in demand among tourists, thanks to the mural.

The Chernobyl cooling tower is visible at a distance of many kilometers within the exclusion zone. Standing directly under the chimney walls provides you with an exhilarating perspective. The walls themselves are crudely made, formed of large blocks, they clearly undulate as they stack skywards. At the very top 4 levels of scaffolding clings to the rim. This complex metal ring has lasted well considering the years of extreme weather it has endured but gravity can only be biding its time. Within the larger tower the acoustics are incredible, with the slightest sounds triggering replies at half-second intervals, resulting in much shouting, whistling and general banging and clanking of random objects. On the floor of the tower are the foundations of the cooling apparatus. A piece of metal pipe, so large you could almost walk through it standing upright, is mounted to a concrete plinth. Many of the concrete components are hand dated. A protective walkway, seemingly improvised from sections of a crane, runs across the floor and leads outside.

To the rear of the towers, building materials are stacked neatly, now destined never to fulfil their original purpose. There are many rotting wooden crates dotted around and from several spill safety helmets, decades of exposure leaving them brittle and discoloured. The ground rises up to what’s left of a fence and beyond sits a crane and a large building from which machines hum and shouting can be heard.

To really appreciate the magnitude of the incomplete giants of Chernobyl, only being inside, you understand the real scale of the design. The building has interesting aerodynamics, inside of which there is a very strong echo – even a crunch of a branch under your foot leads to loud noises, not to mention a scream. 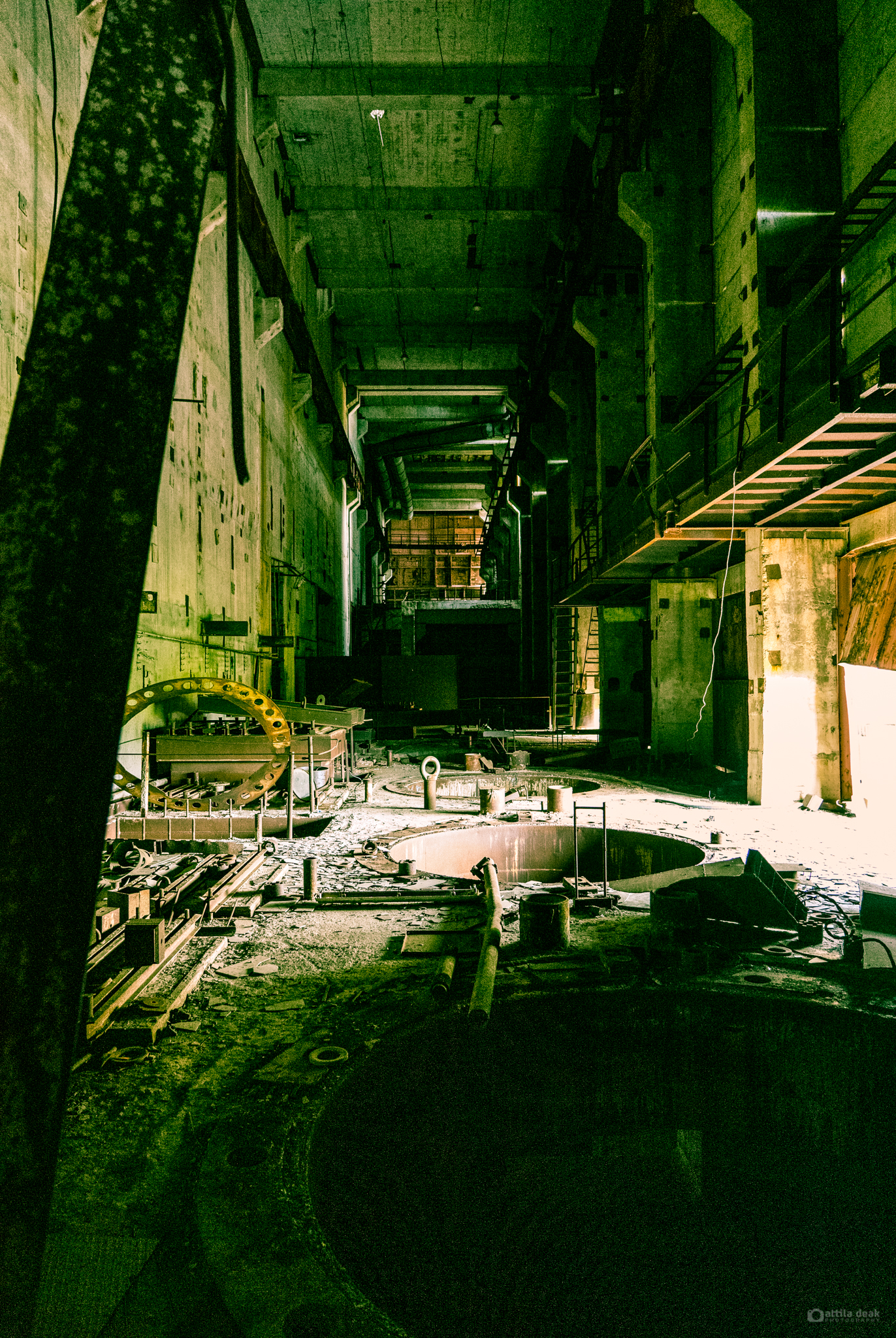 Videos of the Block no5 of the Chernobyl Nuclear Power Plant

Chernobyl We Got Inside The Reactor (Very Dangerous) – Abandoned Explorer