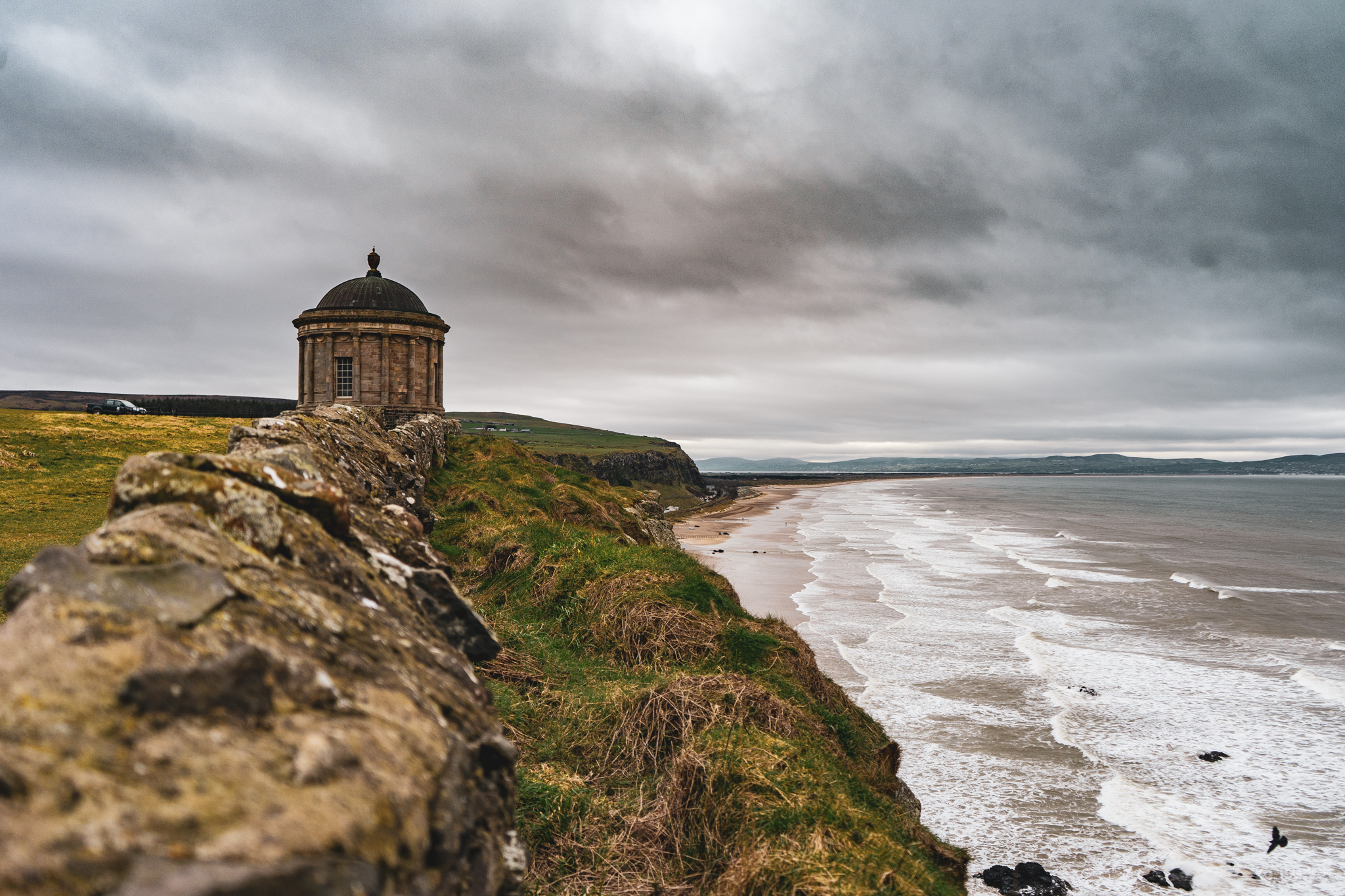 The background story of the Downhill Castle

Downhill House was a mansion built in the late 18th century for Frederick, 4th Earl of Bristol and Lord Bishop of Derry (popularly known as ‘the Earl-Bishop’), at Downhill, County Londonderry. Much of the building was destroyed by fire in 1851 before being rebuilt in the 1870s. It fell into disrepair after the Second World War. Downhill House is now part of The National Trust property of Downhill Demesne and Mussenden Temple.

History of the Downhill Castle in Mussenden

The Rt Rev. Dr Frederick Hervey (as he was at the time), Church of Ireland Lord Bishop of Derry, commissioned work at Downhill Demesne near the village of Castlerock in the early 1770s, after he was made the Bishop of Derry in 1768. Downhill House, overlooking Downhill Strand and Benone on the north coast of Northern Ireland, was built by the architect Michael Shanahan, although it has been suggested that James Wyatt or Charles Cameron may also have been involved in the early stages of design. The construction of the House, and the nearby Mussenden Temple, cost an estimated £80,000. The original principal entrance to the demesne was the Lion’s Gate, which was actually guarded by two heraldic ounces or snow leopards, the supporters of the Hervey coat of arms. In 1784, this entrance was replaced by the Bishop’s Gate. The interior of the house was decorated with frescoes and statues and hung with works by several well-known artists.

After the death in 1803 of Lord Bristol (he had succeeded to the Earldom in December 1779), the estate passed to his cousin, The Rev. Henry Bruce, who had acted as steward of the Estate during the Earl-Bishop’s absences. Bruce’s sister was Frideswide Mussenden, for whom Mussenden Temple was built, and which became a memorial after her death.

Downhill was recorded to have escaped serious damage during the Night of the Big Wind in 1839, but in 1851 a fire damaged a significant part of the house and destroyed the library. Bishop Lord Bristol had amassed a large collection of art, which was kept at Downhill and another residence he built at Ballyscullion. The fire destroyed works by artists including Correggio, Dürer, Murillo, Rubens and Tintoretto, although it was reported that most of the paintings had been saved.

The restoration of the house began in 1870 and continued until 1874 under John Lanyon, the son of architect Charles Lanyon, who maintained many of the original features, although some of the original layout was altered and additions made to the floorplan and decor.

During World War Two, the house was used to billet RAF servicemen and -women. The Bruce family continued to own the house until 1946; by 1950, it had been dismantled and the surrounding land sold. The house was acquired by The National Trust in 1980; the temple had become a Trust property in the 1940s.

While the location and design of the building has been described as a “spectacular” example of the aesthetic idea of the Sublime, contemporary opinion was not always positive. After a visit in 1801, one visitor wrote of the location:

It is impossible not to regret the misapplication of so much treasure upon a spot where no suitable Desmesne can be created…where the salt spray begins to corrode this sumptuous pile of Grecian Architecture, and the imagination anticipating the distant period weeps over the splendid Ruin, a sad monument of human folly.

while another, Edward Wakefield, said in 1812 that he had, “Never seen so bad a house occupy as much ground.

The background story of the Mussenden Temple 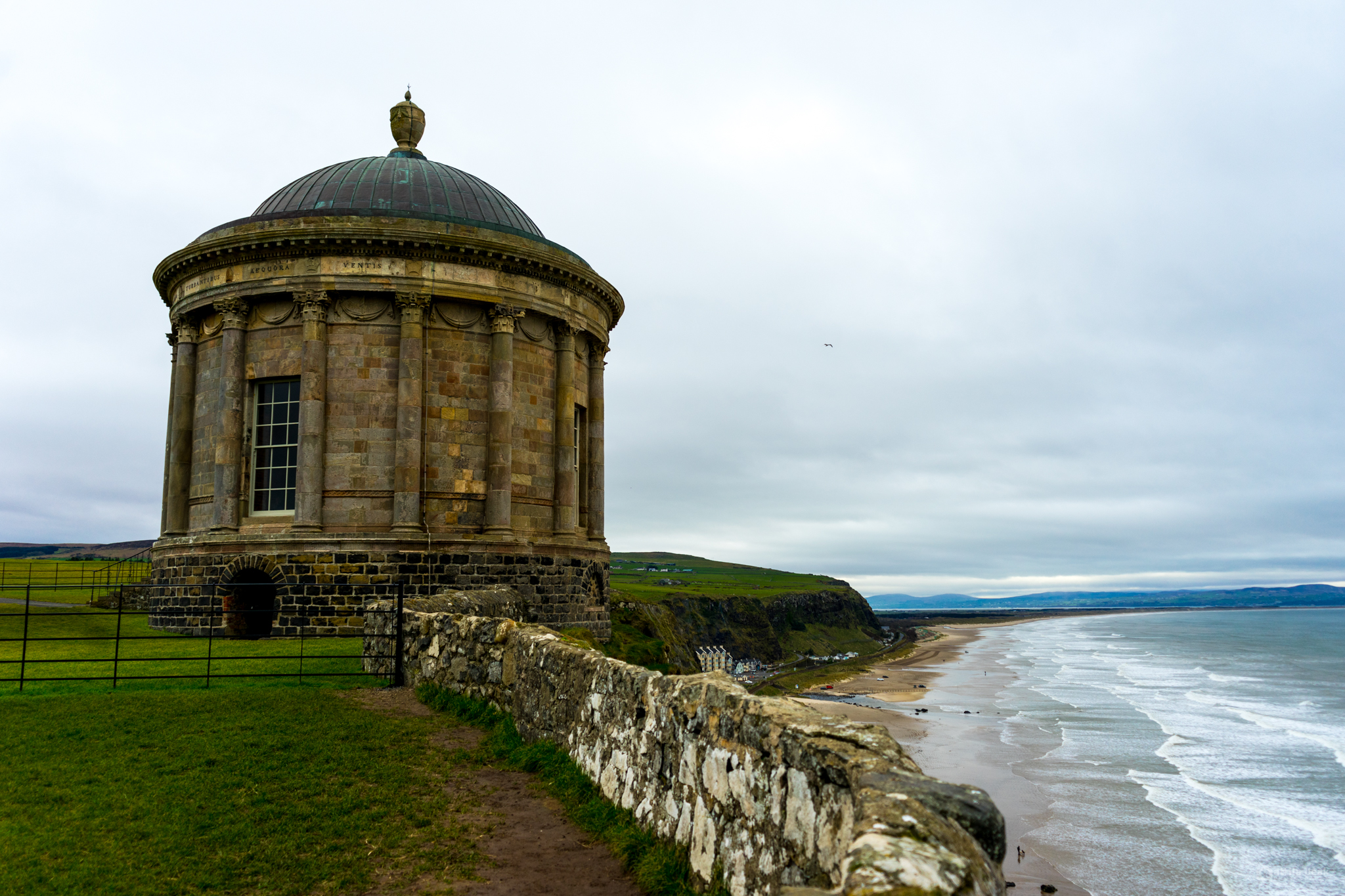 Mussenden Temple is a small circular building located on cliffs near Castlerock in County Londonderry, high above the Atlantic Ocean on the north-western coast of Northern Ireland.

Perched on the cliffs overlooking Downhill Strand, it was once possible to drive a carriage around the temple: however, coastal erosion has brought it closer to the edge. The temple was built in 1785 and forms part of the Downhill Demesne. The demesne was formerly part of the estate of Frederick, 4th Earl of Bristol, who served as the Church of Ireland Lord Bishop of Derry from 1768 until 1803. It was Lord Bristol – popularly known as “the Earl-Bishop” – who had the “temple” built. Constructed as a library and modelled from the Temple of Vesta in the Forum Romanum in Rome, it is dedicated to the memory of Bishop Lord Bristol’s cousin Frideswide Mussenden.

Over the years the erosion of the cliff face at Downhill has brought Mussenden Temple ever closer to the edge, and in 1997 The National Trust carried out cliff stabilisation work to prevent the loss of the building.

The inscription around the building reads:

The quotation is from Lucretius, De Rerum Natura, 2.1–2.

Named in honour of his cousin Mrs. Frideswide Mussenden, whose beauty he greatly admired, this was the Bishop’s library. Its walls were once lined with bookcases. A fire was kept burning constantly in the basement. This and its enclosed flue meant that, even in this very exposed location, the books never got damp.

“I intend to build a Grecian temple in Frideswide’s honour…I intend to build it on the edge of a cliff. It will give employment to the poor, to the district and employment.” The Earl Bishop was clearly heart broken when Frideswide died. His notes on the building state that it was based on Bramante’s Tempietto on Rome’s Janiculum hill, which itself based on the Temple of Vesta at Tivoli near Rome. The building was probably the work of Micheal Shanahan who accompanied the Earl Bishop on one of his many visits to Italy.

Now part of The National Trust property of Mussenden Temple and Downhill Demesne, the grounds encompassing Mussenden Temple, and its manor house (Downhill Castle) are open to the public all year, from dawn to dusk. The “Temple” offers views westwards over Downhill Strand towards Magilligan Point and on across to Inishowen in County Donegal; and to the east, Castlerock beach towards Portstewart, Portrush and Fair Head.

The temple obtained a licence to hold civil wedding ceremonies in 2007.

The story in Hugarian language:

Possible reconstruction of the Castle: 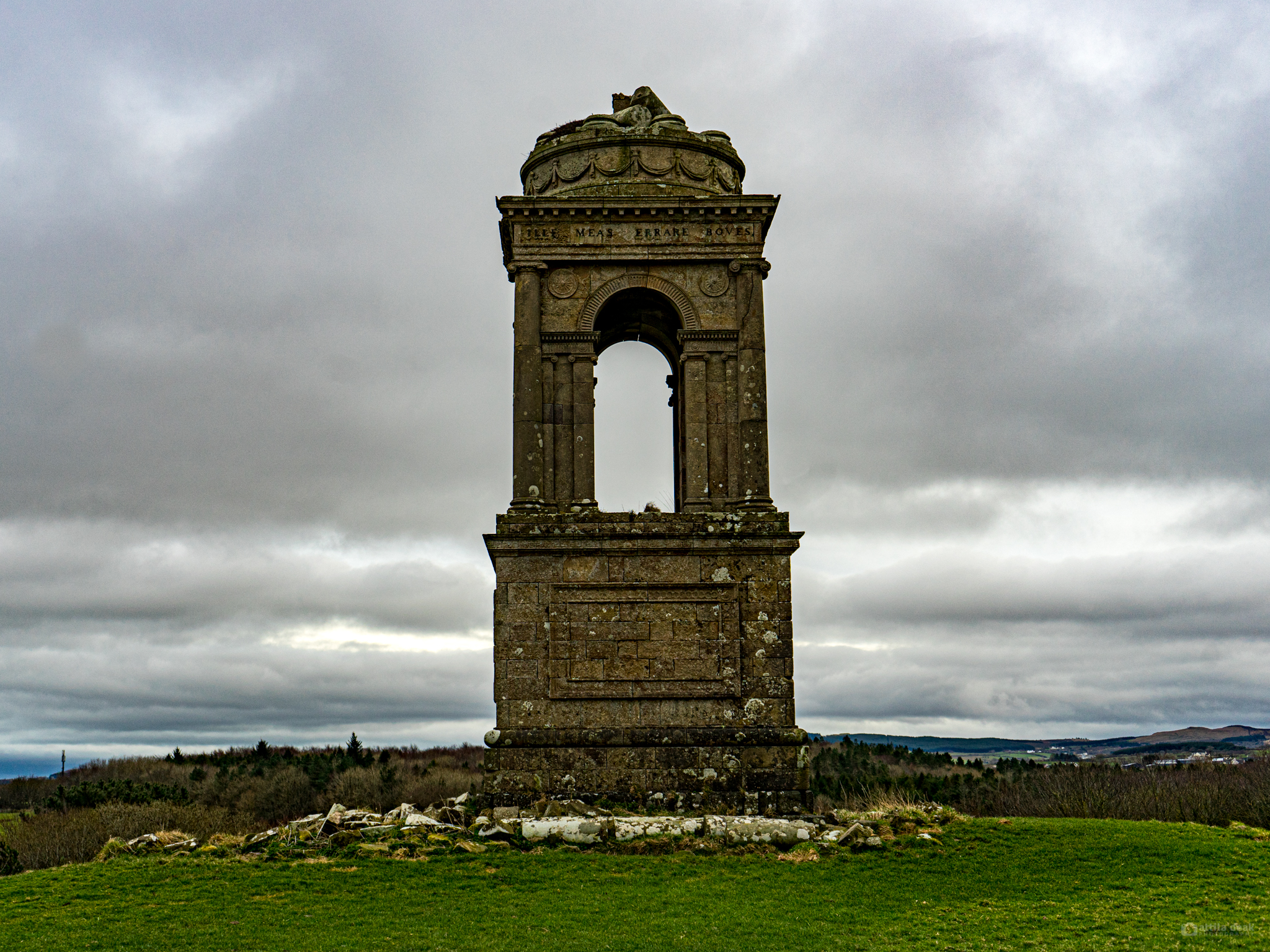